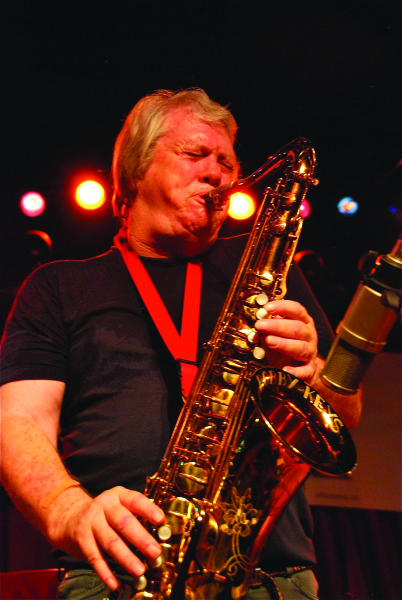 If the essence of rock ‘n’ roll could be defined with just two words, they would be these: the riff. That singular solo, sung or played, which stamps a song so indelibly, other versions sound like forgeries. So many of rock’s most iconic riffs came from hired guns who toiled  in near anonymity; only a few became nearly as famous as their employers. Texas-born tenor sax player Bobby Keys was one.

Keys’ solo on “Brown Sugar” is most often mentioned as his crowning achievement, but his riff on another Sticky Fingers track, “Can’t You Hear Me Knockin’,” was his true tour de force. I’ll never forget opening night of the Stones’ 2002 Licks tour, at Boston’s Fleet Center (now TD Garden), when Mick Jagger announced that the band, then 40 years into its career, had never before done the song live and was going to “have a bash with it.” Keys’ epic solo on the tune, a mesmerizing sonic flight that soared and dipped on feathery notes he played by feel — he couldn’t read music — remains one of my most memorable Stones-concert moments. His super-stardom is made more

extraordinary by the fact that he released only one album of his own, and never held long-term, full-fledged membership in any band until Bobby Keys & the Suffering Bastards formed in 2010. He recorded and toured with many, however, including Ron Wood’s New Barbarians and fellow Lubbock ex-pat Joe Ely’s mid-80s band. That’s Keys (misspelled name and all) sharing the cover of Ely’s belatedly released  Live in Chicago 1987. The shot bears a resemblance to familiar images of Bruce Springsteen and Clarence Clemons; Ely and his band have often been called Texas’ version of Bruce and the E Streeters, except it was Keys who clearly inspired Clemons — and countless others — through his groundbreaking use of saxophone as a guitarlike instrument.

Keys’ route to fame started in Slaton, just outside of Lubbock, where he chased the siren sound of neighbor Buddy Holly’s guitar. Picking up the sax to gain entrée into his high-school marching band, Keys was influenced by both Sonny Curtis and King Curtis, though he was largely self- taught. At 16, he left Lubbock to tour with Buddy Knox (“Party Doll”), then segued to Bobby Vee’s band, which landed him on Dick Clark’s Caravan of Stars tour in 1964. In San Antonio, they shared a bill with a young British band of fellow Buddy Holly fans (a connection that would draw many other Brits, including Lennon, into Keys’ orbit, along with fellow Texans). That first meeting with the Stones kicked off what became an unparalleled musical history.

Their story has been recounted often; Keys did so himself for LoneStarMusic contributor Eric Hisaw’s 2011 feature. But we gathered some lesser-known tales of Keys’ high-octane existence from three people who were particularly close to him: Ely, his Lubbock-born wife, Sharon, and former Austinite  Jessie Scott, who maintains a Texas presence as music director and day voice of the Hill Country’s Sun Radio network.

“When you talk about Bobby, you have to talk about his rambunctious spirit,” recalls Ely, who met Keys in 1979 or ’80 via fellow Lubbock native Davis McLarty. “He was attracted to light and to loudness and to being in the spotlight and playing that horn like there was no tomorrow. His spirit affected everybody.

“The whole spirit of rock ’n’ roll is about the energy that surrounds it,” Ely says reverently. “Whenever he was playin’ onstage, your eyes moved toward him. He had that energy.” Like the eye of a storm, “Bobby was always in a swirl of noise and rhythm and music.”

And like a storm, he often cut a swath of mischief and destruction, famously embodying the rock ’n’ roll lifestyle in all its excess. Occasionally, he got himself into jams that required outside intervention. One night, Ely got a call. Keys told him, “‘I got a bit of a problem here, Joe.’”

Turns out he’d gotten locked up in a Tokyo jail while on tour with the Stones, and didn’t want the press to find out. “He had gone out to some really swanky bar and had ordered some concoction of a drink, and they brought him a bill for like $750, for one drink,” Ely explains. “He refused to pay it and they called the Tokyo police and he landed in jail. And I just thought, man, how could Bobby possibly, everywhere he goes, just find some kind of trouble to get into?”

Keys asked Ely to track down an international lawyer his mother knew. Within hours, he was free. “How do you even get thrown into the Tokyo jail in the first place — and then get out miraculously and make the show the next night?” Ely says, still equally incredulous and impressed.

Sharon Ely recalls a happier 3 a.m. call from Keys and his birthday twin — and main partner in mayhem — Keith Richards. “He and Keith were in a castle,

in the cellar, drinking some wine. They said, ‘Oh Joe, we wish you were over here. We’re drinking wine that’s got dust all over it, really old wine.’ Wine that was worth billions of dollars,” she says with a laugh. Her husband, they knew, is a grape lover. “I thought that was so funny. It was some castle that they were staying in. I don’t even know if they knew whose castle it was. They broke into the cellar; they were having a great time.”

One night, they introduced her to Keys. The two clicked instantly, and, many hours later, got themselves kicked out of an after-hours club. They stumbled into the Pennsylvania Hotel — and didn’t leave for a week. The couple wound up living together for a year; that put her inside the Stones’ inner sanctum.

“This was a highlight of my life,” she says. “I had 20,000 albums in my house and I would make them tapes. And Keith and Woody and Bobby and I would sit around and listen to music. It was a really rarified moment that I cherish. And Bobby opened up the door to all of that for me.”

When it came to charming women, Keys apparently had few equals. Though Scott was the one who broke it off, she admits, “I loved being with him. He was magic. The molecules vibrated differently around him.”

They certainly did during one particularly magical experience Ely related at Keys’ Dec. 5 funeral.

“One time, we played in Edmonton, Alberta, Canada, and our next gig was around Winnipeg,” he recounted. “We left Alberta about 1 in the morning and headed out to get as far as we could. We were driving down this long, empty stretch of highway and it was frozen, and all the sudden, we heard the van driver say, ‘Good God, what was that?’ We saw this light inside of the car. We thought we were gettin’ pulled over by the police. We pull over, and there’s not a car behind us, not a car in front of us, as far as we could see — just about a billion stars. And all the sudden, this wave of light just comes all the way across the horizon and it smashes into another wave of light, and we all jump out of the car.

“For a full 30 minutes, we sat in this freezing cold, watching the lights,” Ely continued. “And nobody said a word … [we were] just speechless at the majesty of the northern lights. That was, to me, a very spiritual moment that we all shared … . I’ll never forget that moment of reverie among all of us. That makes all the hard times worthwhile, when you come across a moment like that.”

Scott’s final spiritual moment with Keys came about after she played a role in the formation of what could be considered Keys’ first actual band, Bobby Keys & the Suffering Bastards. (His bandmates were Mercy Lounge owner Chark Kinsolving, Georgia Satellites frontman Dan Baird, and well-known sidemen Brad Pemberton, Michael Webb, and Robert Kearns.) They got together after playing an Exile on Main St. tribute at the 2010 Americana Music Association conference; the show followed an afternoon panel, both arranged by promoter Shilah Morrow to mark the album’s anniversary re-release. AMA co-founder Scott knew Keys lived near Nashville and suggested Morrow call him.

When Scott passed through Nashville again a year later, she met Keys for lunch, then listened to tracks he’d recorded with the band. “That night, he called me and apologized for being such a disruptive force in my life, which I just found very tender and sweet,” she says.

Those tracks, she says, are amazing — and could become available relatively soon. Which, thankfully, means the world hasn’t heard the last honkin’ riff from Bobby Keys’ soulful sax.