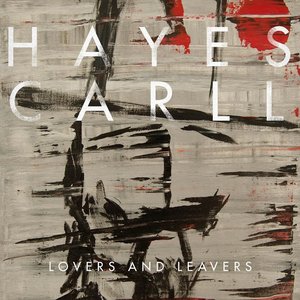 The elevator pitch for Hayes Carll’s fifth album, as sketched out by the artist himself in pre-release press materials and followed to the letter in every interview since, is that he wanted to make a quieter, more introspective kind of record than the four that came before. It was not a bluff. Five years and lots of life changes (including a divorce) removed from the “all I wanna do is stomp and holler” declaration that kicked off his last outing, the swaggeringly ultra-confident KMAG YOYO (and other American stories), the all-acoustic, Joe Henry-produced Lovers and Leavers finds the now 40-year-old Texas songwriter more in the mood for a reflective sit and think. Of course, anyone familiar with Carll’s catalog knows that he’s always been just as adept with listening-room-worthy fare as he is with rabble rousers, but this marks the first time he’s ever depended entirely on the former across a whole record. Predictably, the results have already proven a bit polarizing, with part of the rowdier contingent of Carll’s fanbase feeling seriously short-changed in the drunken-poet fun department even as some critics have rushed to hail the record as his best effort to date. Both sides happen to be onto something: There really is a helluva lot to love about Lovers and Leavers, but it also leaves you wanting more is a way that says more about what’s missing than what the record actually delivers.

On the positive side, what’s not missing here is genuinely top-shelf songwriting. The best songs on Lovers and Leavers — pretty much all of them, really, given that 10 new Carll tunes totaling just shy of 40 minutes leaves little room for filler — could go head-to-head with any of his previous keepers, crowd-favorite rockin’ stompers included. Many of them sound unabashedly personal, if not explicitly autobiographical, which instills “Good While It Lasted,”  “Love Don’t Let Me Down,” and especially “The Love That We Need” and “The Magic Kid” with an intimacy that feels truer and deeper than anything else he’s ever shared on record. “The Love That We Need” may well be one of most emotionally honest — and, odd though it may sound, one of the sweetest — divorce songs every written; it reaches its denouement not out of resentment or bitter tears, but with a sigh of realization that it’s “time to quit hiding what we’ve always known / that something was missing, but we were too scared to look / too busy telling our story ’stead of writing the book.” But caught in the middle of that divorce was an innocent young son — the magic-loving boy with a “head full of wonder and a heart of gold” that Carll, humbled, submits to in teacher-becomes-the-student awe: “There’s not a trick that he can’t figure out / and he’s never stopped the show for fear or doubt / like the rest of us did / He’s the Magic Kid.”

It turns out the father’s got a few nifty tricks of his sleeve, too. It takes real moxie and lyrical sleight of hand to get away with stealing/borrowing the title of one of Townes Van Zandt’s best-loved songs, but Carll and co-writer Darrell Scott pull it off masterfully with “Sake of the Song.” Although it’s got little or nothing to do with Lovers and Leavers’ recurring theme of love lost and found, it’s flat-out terrific and a career high point from first spin. It’s also line for line one of the funniest songs Carll’s ever written; maybe not in the laugh-out-loud kind of way as “Another Like You” or “KMAG YOYO,” but it’s wry enough to prove Carll’s razor-sharp wit isn’t reliant on broad strokes and singalong choruses.

Here’s the rub, though: As obviously capable as Carll is at playing things this low key, the implication that Lovers and Leavers’ determined stripping away of all the rowdier elements of his sound somehow reveals a previously obscured or over-encumbered side of his true poet’s soul does a great disservice to the full-package artistry he’s demonstrated from the get-go. Much like Robert Earl Keen and Ray Wylie Hubbard, Carll’s barroom stompers and even most of his riotous joke tunes have always been far better than just standard yahoo bait, and it was the perfect mix of all of his considerable strengths as a writer and performer that made 2011’s KMAG YOYO such a dizzying delight — and which still makes it the best record he’s made to date. Without going so far as to liken Carll outright to Dylan, that was his Blonde on Blonde — which by comparison makes the uniformly subdued Lovers and Leavers more of a John Wesley Harding or Nashville Skyline kind of record. A decade down the line, when the not-especially prolific Carll has another two, maybe three albums under his belt, I suspect Lovers and Leavers will be looked back on as a beloved and duly respected lesser work important to but by no means defining or redefining the big picture of his career. For now though, it is what it is: 10 brand new Hayes Carll songs good enough to keep scarily talented younger whippersnappers like John Fullbright on their toes — and Carll fans of all stripes justifiably anxious to hear where he goes next. — RICHARD SKANSE