Growing with grace Sons of Bill reach maturity with "Sirens" 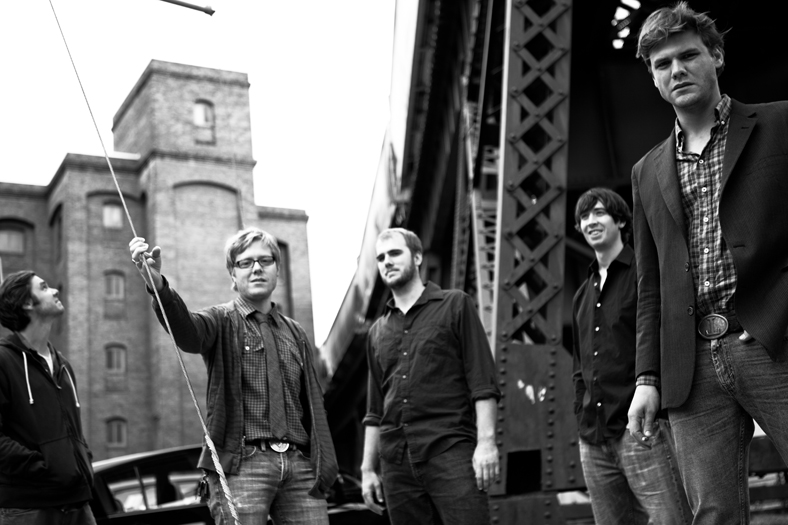 Some kids are practically raised as bandmates. Others join forces at an early age, gain fame, then wind up hating one another.

And then there’s Sons of Bill. This band of brothers — guitarists/vocalists James and Sam and keyboardist/vocalist Abe Wilson (plus bassist Seth Green and drummer Todd Wellons) — didn’t even jam together much while growing up.

“We were in very different musical worlds,” explains James Wilson, the band’s lead singer and songwriter. “I played in a bluegrass band; Sam was a jazz musican; Abe had a rock band in college.”

Only after pursuing their own paths as teens and young adults did they realize they might enjoy making music together. And as their third album, Sirens, confirms, they do it extraordinarily well. Produced by fellow Virginian David Lowery, of Cracker and Camper Van Beethoven fame, and recorded at Sound of Music Studios in Richmond, Va., it’s an effort one could easily characterize as Americana, though James calls it country rock.

Wilson seems rather serious in general. He’s one of six kids born to Barbara, a dermatologist, and Bill, who teaches theology and Southern literature at the University of Virginia in Charlottesville. Those subjects inform the band’s work as much as their musical influences, which — particularly on Sirens — include not just Merle Haggard, George Jones, Ralph Stanley and other country icons Bill taught them to love, but touchstone albums like R.E.M.’s Life’s Rich Pageant, Bruce Springsteen’s Darkness on the Edge of Town, Son Volt’s Trace, Tom Petty’s Hard Promises and the Band’s Music from Big Pink. An astute listener might also hear traces of Gin Blossoms, a comparison Wilson finds flattering. But humor? Not so much.

“Some people have described our sound as uniquely Virginia,” he notes. “There’s one toe in the more urban sounds of the Northeast, but there’s also a distinct Southernness about our music. Virginia is Southern in a way that’s very different from other parts of the South. That was a big part of our upbringing and my family’s history here.”

Wilson characterizes his dad as an old-school Virginia gentleman who instilled in his kids “a disposition toward ultimate things.” (Bill also, according to the band bio, taught them “how to play guitar, write songs, drive a stick shift and back up a trailer.”)

As he often does, Wilson weighs his words carefully before explaining that has to do with “training your mind and your heart to think in those terms” — that is, non-material aspects of existence.

Wilson’s mind and heart led him to Waco after high school, where he spent a year on the World Hunger Relief Farm, training to become an agricultural missionary. Then he went to Deep Springs, an all-male, 26-student college on a Nevada cattle ranch.

“The conventional college route didn’t feel right to me at the time,” Wilson explains. But he ended up completing his theology degree at UVA. Abe acquired one there, too, before heading to the University of Maryland for graduate studies in architecture. Sam pursued classical guitar at James Madison University, then went to New York. Meanwhile, Wilson realized after college that music “was the next thing I had to do.”

Sam was already considering a move back home when Wilson pitched him on forming a band with Abe.

“We really didn’t think of it as starting a family band at all,” says Wilson. “There’s just a musical kinship between brothers … we really understand each other musically, and the chemistry’s great, and we have kind of the same histories and a lot of the same influences, so it really just makes sense.”

They’re careful, however, not to call themselves a Southern band, because that has a Confederate-flag-waving, rebel-redneck connotation they don’t identify with at all. In fact, Wilson speaks lovingly of the South’s “rich literary and artistic traditions,” and defiantly declares, “I’m not a cowboy.” He later worries that he’s made too many references to William Faulkner, his literary hero.

He hasn’t, but one he does make is intriguing. When asked if he characterizes himself as religious, Wilson says yes, though not everyone in the band is.

“I think anybody that takes religion, and especially Christianity, seriously, doesn’t make their art part of their religious agenda, like Christian rock bands do,” he explains. “I think Faulkner was the most deeply religious writer in this country. It’s there in his deep concern that you see within his writing. That’s something I think every truly religious artist strives for.”

In other words, religious sensibilities might inform one’s work, but there’s no need to hit anyone over the head with them. That also applies to Sirens’ underlying theme, which Wilson says has to do with facing life’s realities and the consequences of your actions.

“This album is a coming of age of sorts for us,” he says, “Really stripping ourselves of any rock ’n’ roll delusion and finding the importance and meaning of what you’re doing.”

Calling it “a spiritual homecoming,” he adds, “There is a lot of grace in the record. I hope that comes across.”