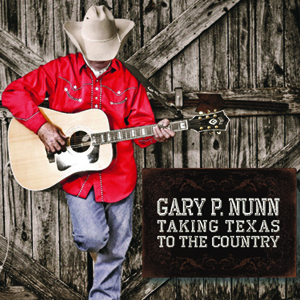 Down here in Texas, not liking Gary P. Nunn is equivalent to being on the wrong side of the wall at the Alamo. The London Homesick Cowboy has been around the Texas scene doing his thing so long, I’m not even going to bother Googling “Gary P. Nunn discography” to count how many albums the man has released. Suffice it to say his longevity and busy tour schedule prove he knows what he’s doing, and his latest album demonstrates it once again in spades. On Taking Texas to the Country Nunn works all the classic country music barroom dance styles as he teaches the new breed lessons in style, taste, lyrical depth and musical integrity. There are cheatin’ songs, drinkin’ songs, Mexico songs, Texas songs and old-fashioned love songs, with not a clunker in the bunch. And Nunn seals the deal when he sings about “Down In Louisiana” where “the women are flirty and the rice is dirty.” For fans of true Texas music, this one is a must-have. — WILLIAM MICHAEL SMITH