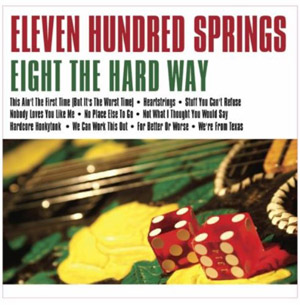 The title of Eleven Hundred Springs’ latest, Eight the Hard Way, is testament to the band’s steady blue-collar work ethic. The Dallas-based band usually churns out new music about once every year and a half, and while the process of writing and recording may not be a simple task, fans of EHS can find ease in expecting quality music each time. A heavy dose of steel guitar and fiddle, love and love lost, cold beer and good times, true to country music roots and not some watered down version of aspiring wanna-be’s — that’s the formula that Matt the Cat (charismatic singer/guitarist Matt Hillyer) and gang (Steven Berg on bass, Arjuna Contreras on drums, Burton Lee on steel and the ever-popular Jordan Hendrix on fiddle) has stuck with the last seven albums, and Number 8 is par for that consistently good course. From the first steel and fiddle note to last, EHS proves once again how deep their Texas roots dig into the country music soil. With lines like, “Don’t sing me no sappy ballads, don’t sing about the headline news,” and “The Hag never needed a laser show,” the new “Hardcore Honkytonk” could certainly be the song that best represents EHS, their music and what they stand for. Ditto “This Ain’t the First,” which tells what happens when too much time is spent at the bars instead at home with the little lady: “D-I-V-O-R-C-E.” And then, of course, there’s “We’re From Texas,” which could easily be considered the new EHS anthem, thanks to this heaping helping of Texas-sized pride: “Say you don’t like us, just don’t get near, ’cause we’ll steal your girlfriend, kick your ass and drink all your beer.” Sometimes, with a band this damn good, nothing beats the tried and true. — SHANE JONES