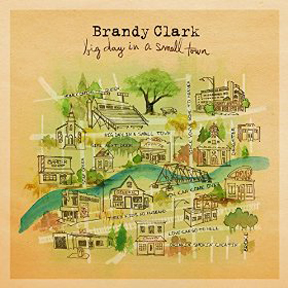 Career-wise, Nashville songwriter Brandy Clark brings to mind a Jim Lauderdale or Chris Stapleton, someone who can be an MVP songwriter for others and inject some much-needed cleverness, heartache, and specificity into a genre whose mainstream could really use all of the above. Stylistically, she’s in league with the likes of Miranda Lambert and Kacey Musgraves; both are among her repeat collaborators and part of a growing legion of well-known stars who’ve borrowed from Clark’s deep creative well. Her 2013 full-length debut, 12 Stories, was a justified magnet for critical acclaim and year-end best-ofs, a wise and witty record rife with punchlines and narratives and the occasional cry from the heart. To these ears at least, this one’s even better: the production’s more layered, fine-tuned, and raucous for the most part but somehow manages to avoid the splashy overkill associated with modern country-pop. The jokes are slyer and funnier, and the songs meant to cut deeper don’t stop until they hit the bone.

The lead-off tracks “Soap Opera” and “Girl Next Door” don’t necessarily get things started on the best foot — ok, small-town life can be kind of dramatic and bad girls can be fun — but it’s pretty much gold from there. Rural main-street vignettes and complicated relationships dominate Clark’s writerly imagination on Big Day in a Small Town; the title track’s tales of hidden high-school pregnancy and drunken pickup-truck wrecks might not sound poetic in the description, but they’re a welcome counterweight to modern radio hits where backroad lovin’ and drinkin’ never seem to carry any consequences.

Along with go-to producer Jay Joyce (Eric Church, Zac Brown Band) she’s not content to rest on the fact that she’s funny and good with details; even if you didn’t speak the language, most of these tracks would be pretty damn fetching. Check out the blend of rockabilly guitars and Tex-Mex organs on “Daughter,” or the textured slow-burn R&B on “You Can Come Over,” equal parts rueful and sexy in both sound and lyric. The record’s also got a good handle on when it’s best to dial way back and let Clark’s voice carry the day: the subtle specifics in “Homecoming Queen” or “Three Kids No Husband” don’t need much more than an acoustic guitar and a muted snare to push their stories along. When it all wraps up with the time-stopping, quietly devastating “Since You’ve Gone to Heaven,” you might need to pull over and compose yourself for a bit. A wrenching (if still sweet-sounding) tale of the heartbreak and dysfunction left in the wake of a father’s untimely death, one hopes for Clark’s sake that it’s not autobiographical. But it’s certainly somebody’s story, and so is nearly every other track on this heartfelt, ambitious album that laughs with the rednecks and down-and-outers without pandering. — MIKE ETHAN MESSICK

Next post Colvin & Earle, together again for the first time