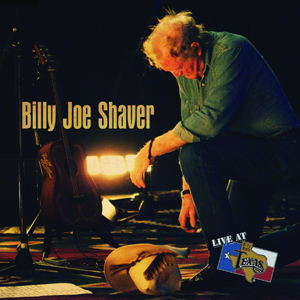 Billy Joe Shaver turns 68 this year, but you’d never know it from the energy he puts into his shows or from the timeless rugged quality of his singing voice. He may sound a bit gruffer, but his half spoken/half sung style has always been as rough as the broken-down lives he sings about, and that high little Hank Williams yelp he slips into the end of a line is still in good shape. So even if you don’t know Shaver, the 22 career-spanning tracks on his latest live album (which comes packaged with a DVD of the same show) will provide a good introduction. Live at Billy Bob’s Texas features solid performances of most of his best-known songs (“Georgia on a Fast Train,” “Black Rose,” “Old Chunk of Coal,” etc.), and for long time fans, two new tunes, to boot. “Wacko from Waco,” a co-write with his pal Willie Nelson that rides a slow-stomping, Waylon Jennings-like beat, is a fictionalized account — delivered with Shaver’s characteristic blend of hyperbole and poetry — of the 2007 barroom encounter that ended with Shaver putting a bullet through the cheek of Billy B. Coker in a parking lot showdown. The other new song, “The Git Go,” is a slow, Biblical ballad that compacts the story of human frailty and salvation from Adam and Eve to today’s wars in Iraq and Afghanistan. Shaver’s longtime touring band adds a bit of rock muscle to the older tunes, which still sound as full of truth and life as they did when they were written, in some cases, nearly four decades ago. — J. POET