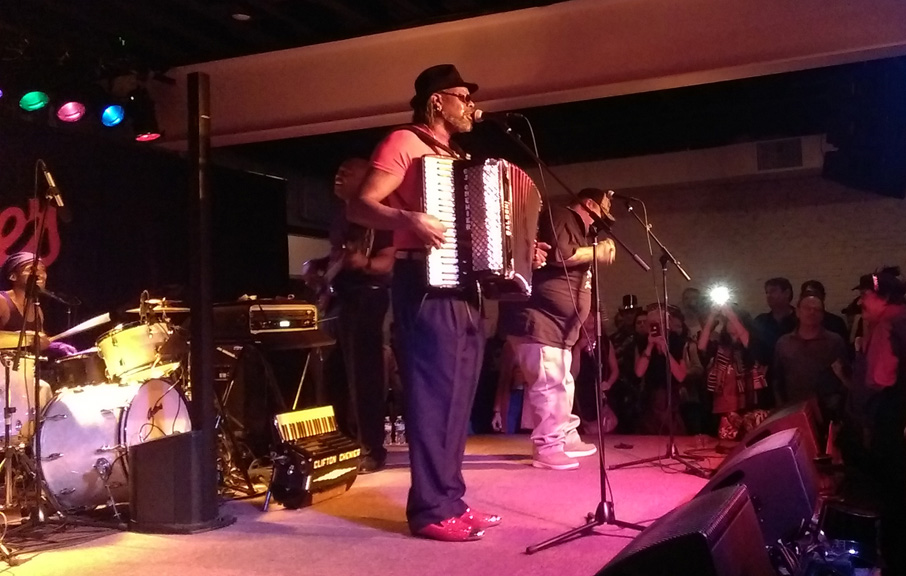 C.J. Chenier and the Red-Hot Louisiana Band help ring in the new year at Antone's newest home of the blues in Austin. (Photo by Lynne Margolis)

I first met Clifford Antone in 1997, the night he christened his club’s Fifth and Lavaca location, which wound up being Antone’s longest home of the blues. When I moved to Austin at the end of 2003, he not only became one of my favorite sources, he became a friend and mentor, even a father figure.

When he left us in 2006, I felt like I’d lost a family member. But whenever I entered that particular space, I could still feel his spirit. Sometimes, I could almost swear I saw his ghost perched on those stage-right steps, waiting to leap on the mic to thank the band and announce the next one, deliver celebratory words or wrangle donations for whatever cause was in need of support.

When the club moved to 2015 E. Riverside Drive, its fifth location, in 2013, it felt familiar; comfortable. Even though it was the first spot not picked by its namesake, it didn’t matter. As Antone and his disciples learned after moving from his original, beloved Sixth Street home to Anderson Lane, then to Guadalupe Street, the Antone’s vibe seemed to transcend any particular building.

But when it closed on Jan. 1, 2014, the physical manifestation of Antone and his legacy — after serving for four decades as an international touchstone of Austin’s identity — was gone. The loss left a palpable hole in the fabric of this city — and in the hearts of so many who loved the man and the music he gave us.

When word came later that year that Will Bridges and several partners, including Gary Clark Jr. and Antone’s sister Susan, were resurrecting the club at 305 E. Fifth St., a sigh of relief could be heard around Austin. Then we waited. And waited. A promised summer 2015 opening came and went. Just before Christmas, buzz built about a New Year’s Eve opening. I knew I had to be there. 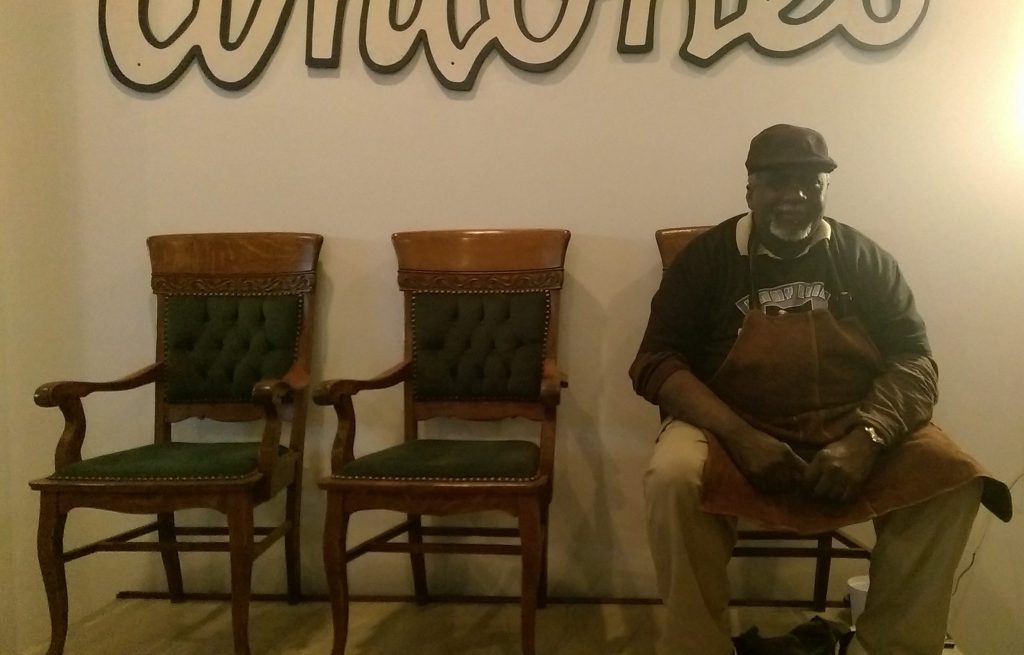 Antone’s wouldn’t be Antone’s without a proper shoe-shine station. (Photo by Lynne Margolis)

Walking into the new space had the feel of going to meet an old lover. Would the sparks still be there? Would it matter?

At the front entrance — a three-sided, covered expanse so vast, it looked like a dining area, minus the tables — I saw a sign spelling out the club’s name in that familiar script. Three traditional-style dining-room chairs stood on a platform underneath — elevated so high, they reminded me of lifeguard stations, not shoe-shine stands.

Surveying clusters of clubgoers and smokers, I understood the design advantage of keeping patrons dry and off the sidewalk. With the club flanked by restaurants Eddie V’s and the Russian House, maintaining traffic flow, especially on nights when long lines form, would keep everyone happy.

Told to enter through the back door, I paced the cold, wet alley, hunting for the right unmarked entrance. It felt creepy.

Walking inside — and encountering bare white walls so newly painted, the smell still lingered — didn’t evoke warm glimmers of affection. The roughhewn dark brick of the Fifth and Lavaca Antone’s was nowhere to be found in this long, narrow box of a room, with what seemed like a smallish, square stage at one end and rather bright lights illuminating the 400 hat-wearing revelers.

The long box. Not my favorite set-up. It pushes people back farther; makes it harder to see. Horizontal configurations, like the old club, make it easier to view the stage, which tends to be wider, allowing more room for the players to be seen as well.

Walking beside this stage to reach the space, I heard familiar voices and spotted Marcia Ball, Eve Monsees, Derek O’Brien, Denny Freeman, Sarah Brown and other players billed as the Antone’s All-Stars. “OK, now we’re getting somewhere,” I thought, even if I still didn’t feel quite connected. I still couldn’t detect Clifford’s presence in the room, even though another namesake sign hanging over the stage reminded me why we were all there. 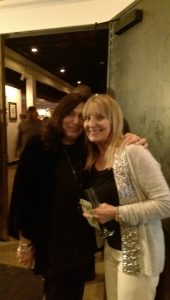 I looked over to one side and saw Susan Antone sitting against a wall, and waved, then worked my way around till I found the sweet spot. In the old club, it was next to the sound board. You could tuck in there, see your friends, chat a bit and still view the show — and not be too much of a distraction or in the way. Here, it was at the stage end of the long bar. There I ran into many old-guard friends mingling and kicking up their heels. Nancy Fly, Deb Fleming, Nancy Coplin … they remembered when — and were thrilled with the new place.

I turned to the bar and decided to order a glass of bubbly. While I waited, I noticed they were using actual glassware. Stemware, even. Oh, glory be! Even if it was just for that night, it made me happy. The beverage was drinkable and reasonably priced at $8. That made me happy, too. I saw the “old bones” of the building that were carefully retained: paned glass around the entrance, long-leaf pine overhead and white tin tiles above the bar. The still-unseen second floor is slated for VIPs and private events, offices and the Clifford Antone Foundation.

But where was Clifford? Where was that essence? I’d heard the wrought-iron entry door handles spelled his initials, so I went to look and saw “C” and “J.” J? Embarrassingly, I’d forgotten his middle name was Jamal.

Coincidentally, those were also the initials of the artist who took the stage after the All-Stars: zydeco accordionist C.J. Chenier, son of Clifton, the man who played opening night at the original Antone’s a few blocks away. C.J., whose silver-tipped red shoes shone brighter than his Baldoni squeezebox, confessed he turned 21 during his first gig at Antone’s — as a sax player in his dad’s band. “I’m not gonna tell you how long ago that was,” he joked. (For the record, it would have been Sept. 27, 1978.)

Standing in that corner with her friends, Ball was already bopping to Chenier and the Red-Hot Louisiana Band’s lively syncopation when I asked, “Can you feel him? Can you feel his spirit?”

I still had my doubts as I walked through the crowd of dancing partiers. They were having a great time. Along the entry wall, I studied the small gallery of tastefully framed posters and photos. There was one touting the club’s first anniversary. Another for its 21st. A few photos captured those early, early days, but there was no shrine, no portrait or image that suggested, “Here he is, still in the room.” It seemed as if a lot more wall space needed to be filled, however. I figured they likely scrambled to hang what they could in time for the soft opening. (The grand opening has yet to be announced.)

Then I turned and saw Ilse Haynes in a glass-walled room behind long display cases. Haynes, who collected cover charges, checked coats and sold merchandise, was part of the soul of Antone’s. Running to give her a hug, I started to feel a little warmer. It was good to see her back where she belonged. Some of the bartenders, too.

As for the musicians … well, Monsees and Mike Buck, her husband, put a pretty good spin on the prevailing mood.

“When we came here this evening just to load in, I couldn’t stop smiling for about an hour,” said Monsees. “We were walking around, seeing all the posters on the wall, and there’s so many little thoughtful things that were done, and so much hard work has gone into it.”

Guitarist Monsees first played Antone’s when she was a teen, when Clifford tossed her and her pal Clark up onstage to jam with Hubert Sumlin and James Cotton. Both Monsees and Clark grew up on that Fifth and Lavaca stage, where Antone shepherded so many young and old talents. She also spent hours on end in Antone’s Record Shop, which she now she owns with Buck, while Grammy-winner Clark, who thanked her in his acceptance speech, helped get the club open again.

There’s something beautifully full-circle about that.

“There’s such respect for the tradition, what came before — and looking ahead,” observed drummer Buck.

Monsees expressed admiration for Bridges, whom, she noted, not only maintains that respect, but has the business sense to make the enterprise succeed. Bridges, already a partner in Lambert’s, Deep Eddy Cabaret and Arlyn Studio, joined Clark and Susan Antone in partnering with previous buyers Spencer Wells, the geneticist and former National Geographic explorer-in-residence, and Oasis Management Co. investor Alex Shoghi in an effort to get the club restored to its former status as a centerpiece of Austin’s world-renowned music scene.

Already, it’s the talk of the town — including among the musicians lining up to grace its stage.

“After the first song, everybody looked at each other, like, ‘Wow! Yeah, it happened!’” Monsees said. “It was funny, because I saw Speedy [Sparks] the other day, and said, ‘Man, the first song has to be Jimmy Reed, it just has to be.’ So I was thinking about it, and [onstage,] Derek said, ‘OK, we have to do a shuffle in E. We have to do a Jimmy Reed shuffle.’ So it was kind of this thread; unspoken. It was what just needed to happen.”

Yes, Buck noted, some fine-tuning would have to occur. But Antone’s — back downtown, in the middle of the action — was, like Jimmy Reed in E, what needed to happen. If a certain spirit hasn’t fully committed to inhabiting the new space yet, or hasn’t arrived in a “tangible” form, the music he so loved — the music that helped put this town on the map — will lure him back soon enough. And if not, that space will still serve as a reminder of how fervently we must work to keep our musical identity alive, because it’s still this town’s lifeblood, and part of our collective spirit. And without places like Antone’s to hold on to it, and tie the threads of its past to its present and future, we could click our heels and chant “live music capital of the world” a million times and still not bring it back if we let it slip away.