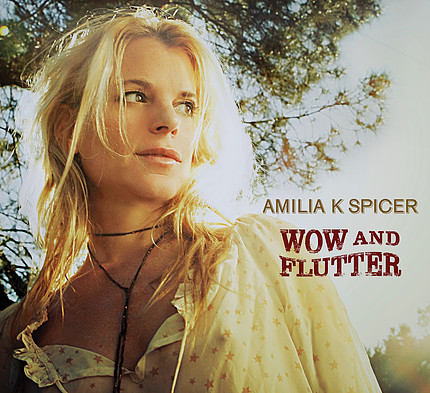 No matter how many new albums are still to come before we make it (knock on wood) to the end of 2017, it’s gonna take a doozy of a challenger to knock Amilia K Spicer’s “Fill Me Up” off the top of my list of the most beautiful songs of the year. It’s a song about longing and leaving, every verse wrapped in mystery but laced with a palpable sense of determination and urgent purpose that seems to strain against the measured tempo, like a restless mustang itching to gallop but held to a steady, disciplined trot — that is, right up until the 3:37 mark, when Spicer runs out of mere words and lets loose a plaintive, melodic moan that sounds like “no no no” but feels like an exultant cry of freedom.

As lead tracks go (and as its very title suggests), “Fill Me Up” is almost too good, like a wholly satisfying main course served ahead of the appetizers. But seeing as it’s been 14 years since Spicer’s last album, 2003’s exquisite Seamless, you can’t blame her for opting to open her long overdue third album with her absolute best shot — while still leaving plenty of more “wow” to go around across the rest of Wow and Flutter. Spicer — a native of rural Pennsylvania and longtime Los Angeleno who’s also spent a good amount of time in Austin (not to mention the Kerrville Folk Festival) — may not be the most prolific singer-songwriter on the Americana landscape, but she makes every song she commits to record count. She seems to have made especially good use out of all that time since her last album, too; after only playing (and writing on) keyboards for both Seamless and her 2000 debut, Like an Engine, the credits this time around find her playing not just piano and organ but melodica, glockenspiel, acoustic and electric guitar, lap steel, and even a little banjo (on “Fill Me Up.”) She also handled production, though the sessions were by no means a one-woman show; other players featured here include Gurf Morlix, Tony Gilkyson, and co-producer Steve McCormick on guitars, longtime Rolling Stones member Daryl Johnson on bass (and vocals on the sassy “Shake It Off”), and even the late Jimmy LaFave, whose unmistakable voice imbues the closing “Shine” with an extra layer of gorgeous shimmer.

Good studio company like that can be bought, of course, but as evidenced by the quality of the material (not to mention of her own performances) that Spicer brings to the table herself, it’s earned in spades. She writes with equal measures stunning economy and evocative grace, boiling primal desire down to its bare essence in “Lightning” (“Baby, I’ll shake your every shore”) and weathering the aftershock with blunt honesty (“Fast as I run I can’t catch my breath / and I love you more than I can forget,” from “Wild Horses”). And her honeyed but smoky voice carries the languid chill of Aimee Mann with an undercurrent of wearied Lucinda Williams sensuality — making it the perfect instrument for conveying bittersweet, snapshot vignettes of frayed relationships and long desert highways (“Interstate 10 can make you believe you’re leaving behind everything you don’t need / Past blown out tires sacrificed in the heat, you say that will never happen to me,” from “Shine”). Best of all, though, are her melodies, which tug, twist, and lift the heart, gut, and spirit with visceral seductiveness. Simply put, Spicer could pretty much just hum her way all the through Wow and Flutter and still pull you under her spell. Here’s hoping the wait for her next album won’t be another decade and change; but regardless, the shine on this one ain’t fading away anytime soon. It’s a stunner. — RICHARD SKANSE