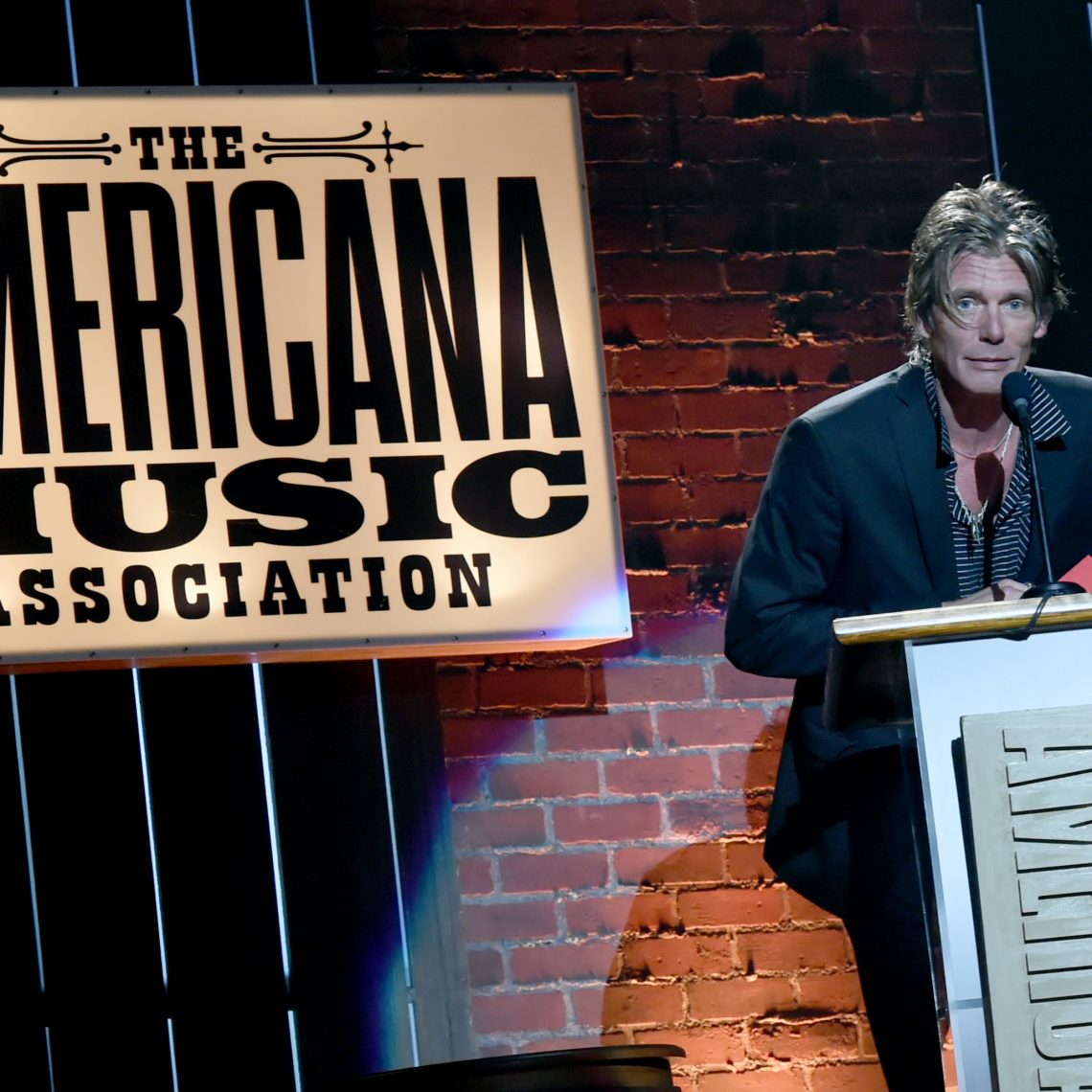 On the plane to Nashville, Charlie Sexton said he wasn’t going to win “the Buddy Miller Award” — the unofficial nickname for the Instrumentalist of the Year honor bestowed annually at the Americana Music Honors & Awards, the marquee event of the growing music confab now known as AmericanaFest.

But Wednesday night at the Ryman Auditorium, he did indeed win the night’s first award, despite his status as a relative outlier in Americana Music Association circles. Though Bob Dylan’s lead guitarist has produced albums by Los Super 7 and Lucinda Williams and played with David Bowie, Eric Clapton and Keith Richards, his presence is less pronounced in Nashville, where five-time winner Miller, two-time winner Jerry Douglas and many other winners and nominees reside, than in Austin, where he serves as band director for the Austin Music Awards and similar events.

Though Sexton’s fellow nominees included keyboardist Jen Gunderman and guitarist Courtney Hartman (and Steelism’s Spencer Cullum Jr.), the 16-year-old award — which Sexton, again referencing Miller, dubbed “the best award anybody could ever get,” has gone to only one woman — Sara Watkins, in 2016.

Miller, the Americana Award record holder (with 11) and the show’s beloved bandleader, fell ill Tuesday and was unable to perform; Houston native Rodney Crowell, the Song of the Year winner for “It’ Ain’t Over Yet” (and Album of the Year nominee for Close Ties), also had to call in sick. 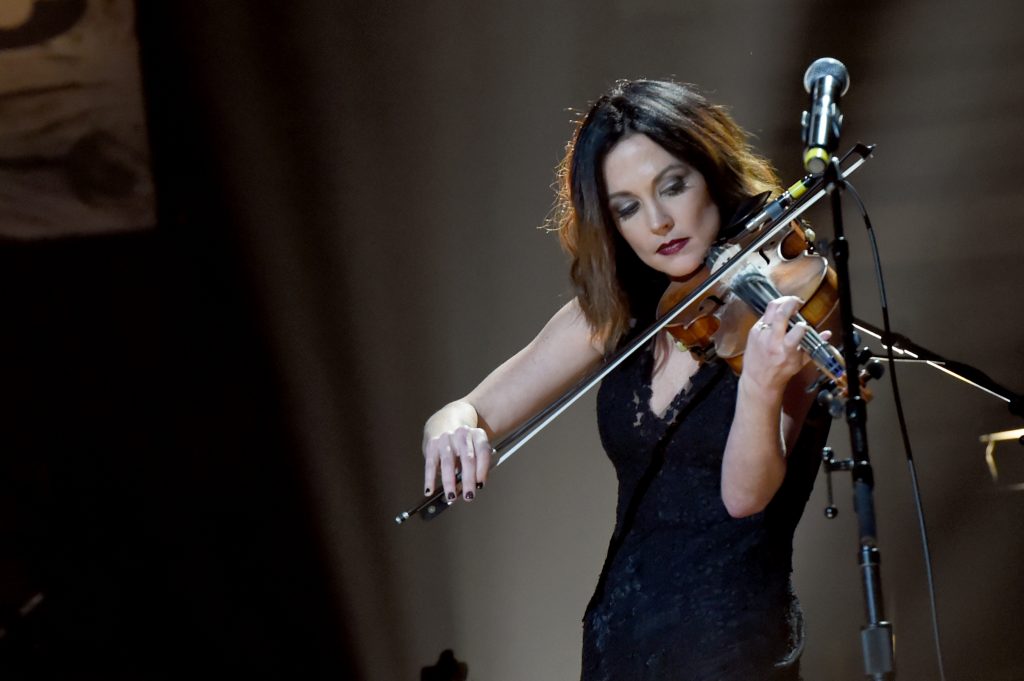 But Artist of the Year nominee — and recently christened “Honorary Texan” — Jason Isbell, who’s tied with Crowell for six wins apiece, was on hand to celebrate his Texas-born wife Amanda Shires’ win for Emerging Artist of the Year. Applause as the names were announced suggested fellow contender Aaron Lee Tasjan was the favorite, but both were well-received, as were nominees Brent Cobb and Sam Outlaw, during their performances. 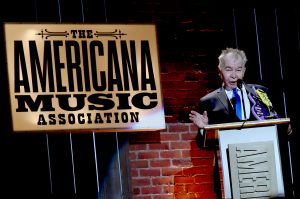 Sturgill Simpson, who won Album of the Year for A Sailor’s Guide to Earth (and was nominated for Artist of the Year) was absent because he’s touring, but Artist of the Year winner John Prine was very much in evidence — presenting the Trailblazer Award to a tearful Iris Dement (“for her commitment to making classic folk and country forms relevant in her time,” according to the program guide), then duetting with her on his charming ode, “In Spite of Ourselves,” before performing another of his classics: “Lake Marie.”

Though instrumentalist nominees didn’t perform, Duo/Group of the Year nominees Billy Bragg & Joe Henry, the Lumineers, Drive-by Truckers (also Album of the Year nominees for American Band) and cooler-than-cool winners Marty Stuart & His Fabulous Superlatives — all provided highlight moments. Bragg and Henry dedicated their performance of “Gentle on My Mind” to its composer, John Hartford, and “the late, great man” who made it at hit: Glen Campbell. Afterward, emcee Jim Lauderdale said quietly, “Go softly into that good night, Mr. Glen Campbell.” 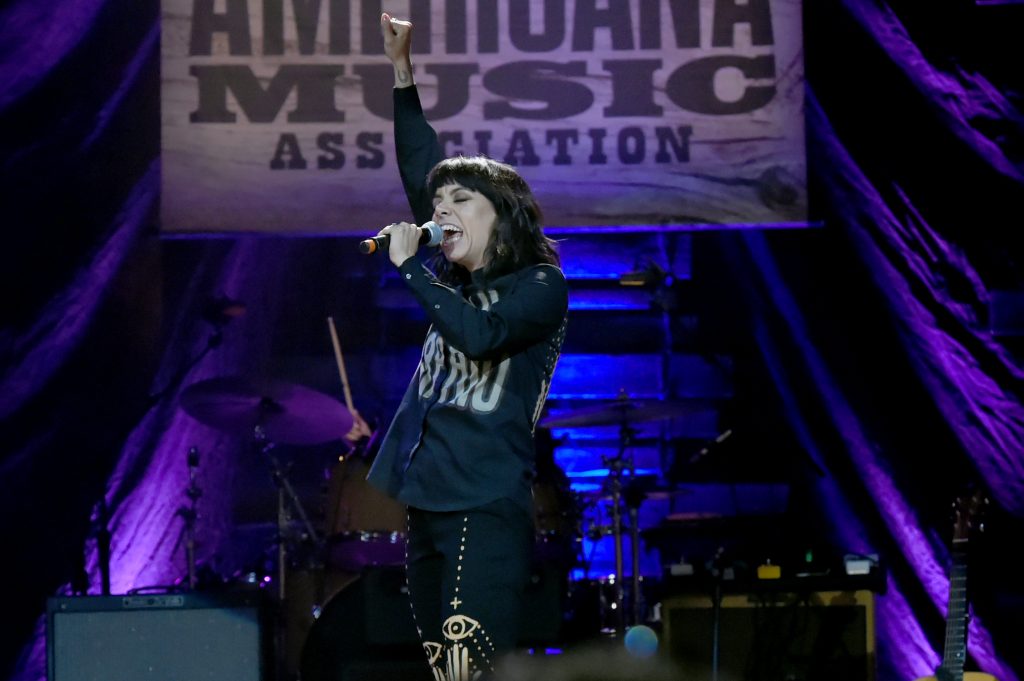 Alynda Lee Segarra and her band Hurray for the Riff Raff didn’t win an award, but they did deliver one of the evening’s most exciting performances. (Photo by Rick Diamond/Getty Images for Americana Music)

Standout performances also came from Album of the Year nominees Rhiannon Giddens (for Freedom Highway) and Hurray for the Riff Raff (for The Navigator). Riff Raff frontwoman Alynda Segarra not only provided one of the night’s most electrifying moments, evoking a young Patti Smith as she sang a powerful “Pa’lante,” she also provided its most overt political statement. “No matter how hard some people in power try to hold us back, we’re moving forward,” she said. The New York native, of Puerto Rican descent, wore a T-shirt bearing, in large letters, the words “Jail Arpaio” — a reference to Arizona sheriff Joe Arpaio, who received a presidential pardon in August after being convicted of criminal contempt of court for ignoring orders to stop targeting Hispanics for arrest.

Earlier in the show, the notion of speaking out was addressed when Ken Paulson, president of the First Amendment Center and dean of Middle Tennessee State University’s College of Media & Entertainment, presented Graham Nash with the Spirit of Americana Free Speech Award. (Admirer Paulson named his daughter after the Hollies song “Carrie Ann.”) One of the few double Rock and Roll Hall of Fame inductees, for the Hollies and Crosby, Stills, Nash & Young, Nash was recognized for using his art form to address injustice and provoke thought — via songs such as “Chicago” and “Military Madness,” participation in events such as the 1979 No Nukes concerts and even pulling his song, “Teach Your Children,” in the midst of its chart climb so Neil Young’s “Ohio” could be rush-released following the May 4, 1970 Kent State shootings.

“When I first heard about it, I wondered why an Englishman was getting an Americana Award,” Nash, 75, said, to laughter. “Then I realized that Americana has, in fact, changed the world. I mean, even in my short life, we have jazz, we have the blues, we have some interesting folk-singing, we have American rock ‘n’ roll.” He mentioned hearing Buddy Holly and the Everly Brothers on Radio Luxembourg as a kid, and related the story about being invited to sing with them in Toledo, Ohio, and receiving a board tape he still has. Then he invited the Milk Carton Kids out to re-create the sterling three-part harmony he’d crafted with the Everlys on “So Sad.” Though they’d met for the first time earlier Wednesday, they stood before a single mic and flawlessly nailed every gorgeous note. 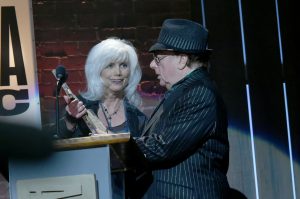 Nash was hardly the first U.K. honoree, or even the night’s only one; Van Morrison later received the Lifetime Achievement Award for Songwriting from Emmylou Harris.

Place — and more subtly, race — were referenced by presenter John Paul White, who noted growing up in Alabama “is complicated” while introducing fellow Southerners he called “in my opinion, the most important band in America today.” That would be Drive-by Truckers, the Georgia band that has famously addressed the region’s flaws (and charms) in epic song cycles.

As racial divisiveness continues to fester in America, it’s been an issue for the Americana genre as well. While growing from its ’90s “alt-country” infancy to a Grammy Award category and radio format, it’s struggled with diversity. In the past few years, awards organizers have made obvious efforts to embrace artists of color, particularly in Lifetime Achievement Award categories. This year, Robert Cray received the Lifetime Achievement Award for Performance, and Memphis’ famed Hi Rhythm Section, with whom Cray recorded his latest album (titled Robert Cray & Hi Rhythm) received the Lifetime Achievement Award for Instrumentalists. And Keb’ Mo’ is on the Americana Music Association board. But as Rollingstone.com just noted, the organization, formed around a genre that claims to be about inclusion, still has barriers to break in its mainstream categories.

As artists like Giddens, Segarra, Valerie June and 2012 Emerging Artist winners Alabama Shakes appear with greater frequency, whether alongside influences such as lifetime achievers Taj Mahal and Flaco Jimenez, or their contemporaries, it’s conceivable that one day, their ethnicity won’t be notable. And that, to paraphrase Lauderdale’s line, will truly be Americana.