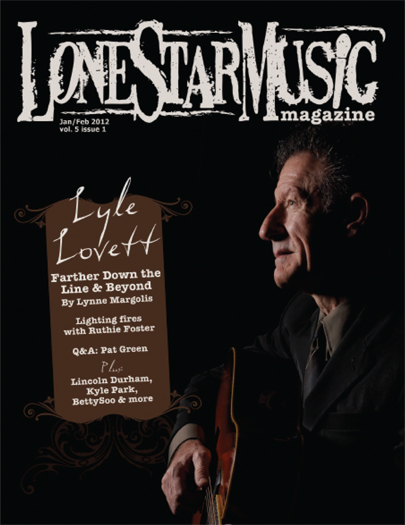 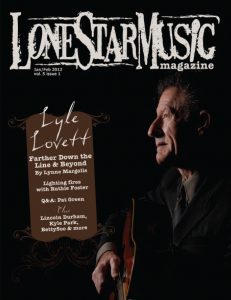 As an incurable record-collecting junkie, I’ve long been a sucker for “Desert Island” lists: You know, where people are asked to pick the 10 or so albums they absolutely couldn’t live without. Granted, the iPod Age kind of took the challenge out this, given that it’s pretty easy to carry just about every album with you these days, but I still get a kick out of trying to narrow my favorites down to a more exclusive selection. And ever since I first heard it back in 1996, Lyle Lovett’s The Road to Ensenada has always been a personal top-10 contender. And I’d wager that, if you’re a discerning fan of Texas, Americana, singer-songwriter, and/or country music, there’s bound to be at least one Lovett album on your desert-island shortlist, too. If not … well, different strokes for different folks and all, but you’ve lost my vote at the next tribal council.

For more of my record-geek rhapsodizing about Ensenada (along with a look at the rest of Lovett’s catalog), flip back to this issue’s installment of Mr. Record Man. But first, get to know the man himself a whole lot better via our cover story by frequent LoneStarMusic contributor Lynne Margolis (who’s not originally from Texas, but we like her anyway). In it, she focuses on the integrity, humility and commitment to excellence that have earned Lovett the distinction of being one of the most respected and honored musicians to come out of the Lone Star State in the last quarter century, from before his self-titled 1986 debut up to his forthcoming Release Me. And while I’m mentioning the cover story, allow me to also give a shout out to photographer Rodney Bursiel, who made the trek from Austin to Houston to shoot Lovett at one of his favorite old-school stomping grounds, the legendary Anderson Fair. Bursiel has now become LoneStarMusic’s official photographer of living-legend musical Aggies, having also shot Lovett’s A&M buddy Robert Earl Keen for our Sept/Oct 2011 cover story.

Of course, Lovett’s not the only Lone Star featured in this issue. We’ve also got a candid Q&A with Pat Green (courtesy of Chris Mosser); profiles on Ruthie Foster, Lincoln Durham, Kyle Park and Tyrone Vaughan; and a wonderful feature by D.C. Bloom (who wrote our cover story on Hayes Carll this time last year) that explores the powerful, frequently touching and occasionally obsessive attachment some artists (including Joe Ely, Cody Canada, Walt Wilkins and many more) have to their absolute favorite guitars. Plus, Terri “Rock the Goat” Hendrix and “You Can Call on Al” Barlow contribute what I believe to be their best columns yet, sharing unforgettable stories on “The Notorious Namedropper” and Terlingua’s legendary Pablo Menudo, respectively. And in our “Heartworn Highways” guest column, Austin singer-songwriter BettySoo, a winner of the esteemed Kerrville New Folk competition, reflects on the important role that sometimes singing other people’s songs still has in contemporary folk music.

Both Lovett’s Release Me and Pat Green’s new album, Songs We Wish We’d Written II, (speaking of cover songs) are scheduled for release on Feb. 28. That happens to be the week after this year’s International Folk Alliance Conference in Memphis. I know this off the top of my head because a handful of us here at LoneStarMusic Headquarters will be returning to the conference for our second year in a row, and I’m already dreaming about devouring another rack (or three) of dry-rubbed ribs at Charles Vergos’ Rendezvous — not to mention partaking in the gluttonous array of fantastic performances to be heard in showcase after showcase at the conference hotel. After we get back to Texas, we’ll only have to wait a couple of weeks before getting to dive into an even bigger musical smorgasbord, South by Southwest — during which we will once again be hosting both official and unofficial showcases throughout the week. After that, well, we’ve still got our favorite shindig of the year to look forward to: the LoneStarMusic Awards, set for April 1 (no, seriously) at the Texas Music Theater in San Marcos. We’re working overtime to put together another really great show this year, so keep your browser aimed at www.lonestarmusic.com (and keep checking our Facebook page) for further details as they become available — and to cast your votes for your favorite artists, albums, songs and venues of the past year. Every vote counts, people — and though I obviously know it won’t be the most important ballot you’re called upon to fill out this year, I’d be willing to wager Mitt Romney’s entire campaign budget that it’ll be the funnest.