LSM’s Progressive Country/Honky-Tonk Heroes Showdown, Round 2! Townes Van Zandt shoots down "Shotgun Willie" to lead all competitors advancing to Round of 32 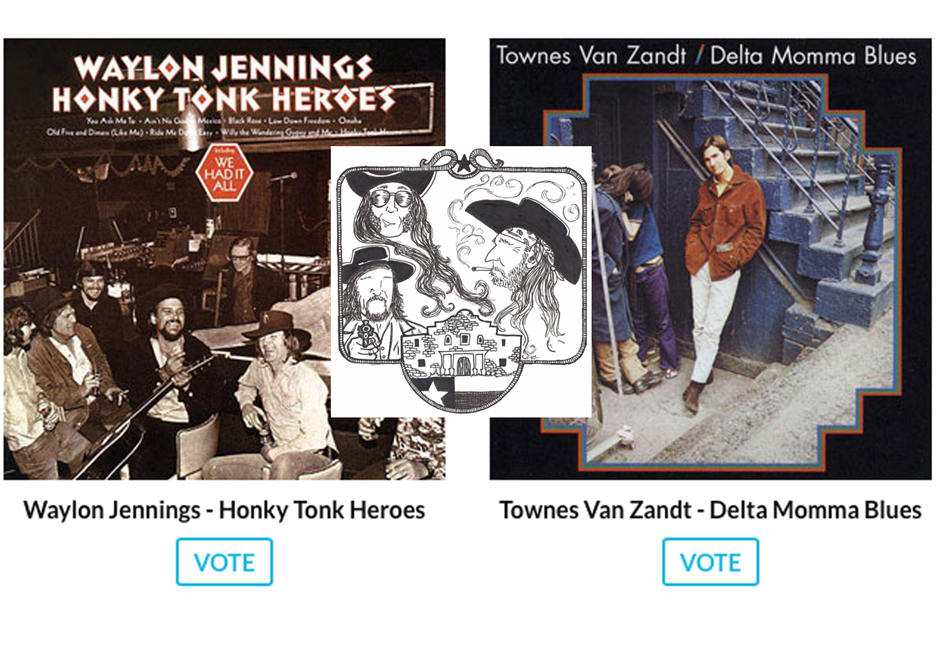 Well, that wasn’t easy, was it?

Oh sure, there were a few uneven match-ups there at the start. Although we maintain that all 64 of the albums we picked for our “That ’70s Texas Progressive Country/Honky-Tonk Heroes Shotgun Showdown” qualify as classics, by the rules of basic tournament seeding, the first round is always going to find a handful of admitted long-shot contenders more or less served up as sacrificial lambs to the No. 1 or 2-seeded Big Dogs. And though upsets aren’t unheard of, if you really thought the scrappy Lost Gonzo Band had a prayer against Red Headed Stranger or that Asleep at the Wheel was going to sneak past ¡Viva Terlingua!, we can only guess that you’ve already gotten your hands on some Willie’s Reserve. But outside of those and a couple of other battles where the great-but-obscure like Steven Fromholz and Michael Nesmith were pitted against the great-and-unassailable like Guy Clark’s Old No. 1 and Terry Allen’s Lubbock (On Everything), most of our Round 1 match-ups had folks literally cursing us for making them pick one treasured favorite over another. Pit Willie vs. Townes or Guy vs. Waylon or Rusty vs. Doug right from the start, and boy, some people get downright on’ry and pissed. We don’t count on ’em getting any less so going forward, either, because this whole Outlaw tourney thing’s about to get really out of hand in Round 2.

But before we look at those match-ups (and start dodging bullets again), let’s recap some of the takeaways from Round 1 — first and foremost being, don’t mess with TVZ. The late, great Townes Van Zandt entered the tournament with five different albums, and all five of them waltz right into the second round virtually unscathed; in fact, the only match-up Van Zandt had that was even close — by a margin of only 10 votes — found his 1978 album Flyin’ Shoes beating a record we were sure was gonna make it at least to Round 4, if not the Semifinals: 1973’s magnificent Shotgun Willie. Van Zandt’s seminal Live at the Old Quarter also bested Nelson and Leon Russell’s duo record, One for the Road, and Willie’s ground-breaking 1971 concept album, Yesterday’s Wine, lost to the Flatlanders’ 1972 debut (originally released only on 8-track as All American Music before it’s belated reissue on Rounder decade later as More a Legend Than a Band).

Rest assured, though, that Willie’s still in this thing, with the aforementioned Red Headed Stranger advancing along with 1974’s Phases and Stages and 1978’s blockbuster Waylon & Willie. And speaking of Waylon, he’s holding strong on his own, too: Jennings’ Dreaming My Dreams and The Taker/Tulsa were beat by Guy Clark’s Texas Cookin’ and Kris Kristofferson’s Jesus Was a Capricorn, respectively, but Honky Tonk Heroes made short work of Rusty Wier’s Black Hat Saloon, Waylon Live put a stop to Jerry Jeff Walker’s sprawling A Man Must Cary On, and Lonesome, On’ry & Mean beat Joe Ely’s Down on the Drag (albeit just barely, by only four votes). Ely and Jerry Jeff are both still in the hunt with two or more albums each, though, as are Doug Sahm, Guy Clark, Kristofferson, and Terry Allen. Michael Murphey, Billy Joe Shaver, Delbert McClinton, Freddy Fender and Willis Alan Ramsey all advance as well with single entries.

Out of the tournament for good, though, are the aforementioned Fromholz, Nesmith, Asleep at the Wheel, and the Lost Gonzo Band (well, at least under their own name — those guys are all over the remaining Jerry Jeff records as well as Murphey’s Geronimo’s Cadillac). Also gone are Mickey Newbury, Ray Wylie Hubbard, Rusty Wier, Butch Hancock, B.W. Stevenson, Steve Young, Kinky Friedman, and McClinton’s old duo, Delbert and Glen. So before digging into Round 2, raise a can of Lone Star or shot glass of good tequila in their honor; or better yet, seek out all those old records and give them a spin, especially if you’ve never heard them before. Trust us: In a competition this packed with “Texas Gold,” there are no real “losers” — even if Mr. Hubbard would probably rather you not bother with that old Cowboy Twinkies record that made him and the whole band cry the first time they heard the final mixes.

And now without further ado, here’s who meets who in Round 2 … On the left side of the bracket, we’ve got Willie’s Red Headed Stranger up against Clark’s Texas Cookin’; the Flatlanders against Doug Sahm and Band; Kristofferson’s The Silver-Tongued Devil and I against Waylon’s Lonesome, On’ry & Mean; Sir Doug and the Texas Tornados’ Texas Rock for Country Rollers against Murphey’s Geronimo’s Cadillac; Waylon’s Honky Tonk Heroes (comprised almost entirely of bulletproof Shaver songs) against Townes’ Delta Momma Blues; Sahm’s Groover’s Paradise against Shaver’s Old Five and Dimers Like Me; Jerry Jeff’s Ridin’ High against Kristofferson; and Terry Allen’s Juarez against Townes’ Flyin’ Shoes. And on the right side, we’ve got Jerry Jeff’s ¡Viva Terlingua! against Townes’ High, Low, Low and In Between; Joe Ely’s self-titled debut against The Late Great Townes Van Zandt; Jerry Jeff Walker against Willie’s Phases and Stages; Waylon & Willie against Willis Alan Ramsey; Townes’ Live at the Old Quarter against Freddy Fender’s Before the Next Teardrop Falls; Kristofferson’s Jesus Was a Capricorn against Ely’s Honky Tonk Masquerade; Delbert McClinton’s Victim of Lost Circumstances against Terry Allen’s Lubbock (On Everything); and Waylon Live against Clark’s Old No. 1.

Who will triumph this round? Once again, YOU decide. Click on the “Vote Now” button on the image below if you’re on a mobile device or on any of the match-ups if you’re on a computer, and pick away. And remember to keep checking back to vote again in each new round (all times CST).