Eve Monsees & the Exiles: “You Know She Did” 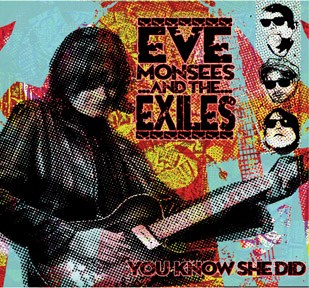 EVE MONSEES & THE EXILES
You Know She Did
Serpent

It’s hard to stand out in a town full of hot guitar players, but Eve Monsees does. With an ear for infectious riffage, a knack for fierce, concise solos and a raw sonic sensibility steeped in a lifelong love for classic blues and garage-rock records, the Austin native makes reliably raw, unfailingly catchy rock ’n’ roll that doesn’t sound like anybody else’s, accompanied by a crack trio of local vets: second guitarist Thierry Le Coz, bassist Pat Collins and drummer/husband Mike Buck.

You Know She Did, the Exiles’ third longplayer is a consistently compelling vehicle for Monsees’ skill and versatility, and for her band’s ability to balance raucous raunch and distinctive grooves. The punchy originals “One Glass,” “Follow the Thread” and “Fool” are powered by insistent, indelible guitar hooks and Monsees’ uninhibited vocals, which are noticeably stronger here than on her prior releases. Equally impressive are the lo-fi garage-blues “Mr. Devil,” the country-rock “Footnote,” the Hollyesque rocker “Don’t Turn Your Back on Me” and the loopy Collins-penned, Bo Diddley-inflected “Rock Paper Scissors.”

Monsees is equally judicious in her choice of outside material, turning the title track, an obscure Hollies oldie, into a swaggering, insistent anthem, and jacking up the voltage on Delbert and Glen’s country weeper “I Received A Letter” and the Mark Four’s British Invasion raveup “I’m Leaving.” — SCOTT SCHINDER